'Abdu'l-Bahá's visit to Philadelphia in 1912

‘Abdu’l-Bahá arrived in Philadelphia at 6:00 p.m. on Saturday, June 8 and went straight to the Hotel Rittenhouse. On Sunday, June 9, He drove to 15th Street and Girard Avenue, where the Unitarian Church was located, and spoke to the congregation about some of the major teachings of Bahá’u’lláh.

In the afternoon He received visitors, including reporters, who came to His hotel rooms. That evening He spoke before a congregation of 2,500 in the Baptist Temple, at Broad and Berks streets. In His lengthy address He elaborated on nine of the principles of the Bahá’í Faith.

At 9:30 a.m., Monday, June 10, He addressed a group of fifty people at the home of Jesse Revell. Until His train left at 3:00p.m. for New York, He conducted interviews at the Revells’ and at the Hotel Rittenhouse.

"In the estimation of God all men are equal" 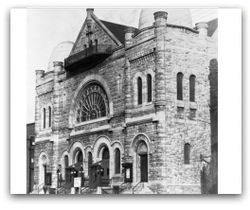 Baptist Temple in Philadelphia in 1912
‘Abdu’l-Bahá’s words at the Baptist Temple in Philadelphia on June 9, 1912, echoed the Declaration of Independence, conceived in that same city nearly a century-and-a-half before. ‘Abdu’l-Bahá explained that his father, Bahá’u’lláh, “taught that an equal standard of human rights must be recognized and adopted.”

It was something that the pastor at the Baptist Temple — Dr. Russell H. Conwell — had been practicing for over forty years. By the time ‘Abdu’l-Bahá visited Conwell’s church, it was surrounded by a university, and not one but three hospitals, all designed to uplift the community of Philadelphia.

Russell Conwell began his working life as correspondent for the American Traveller, a job that would take him to the four corners of the earth. While riding in a camel caravan through the Tigris and Euphrates valley in Mesopotamia, Conwell listened as his guide recounted tall tales, one of which would change the course of his life.

It went something like this: A young Persian farmer named Ali, was lured away from his fruitful fields by tales of diamond fields in a far off land. He sold his farm and set out in search of the diamonds. Far and wide he roamed, year after year, until both his youth and his wealth disappeared. Ali died an old, poor, and disenchanted man. Not long afterward, acres of diamonds were found on his own land.

To Conwell’s fellow travelers, it was just another story to pass the time. But in Conwell’s mind a great truth had been sown. The story became the backbone of a speech – “Acres of Diamonds” – that he would deliver 6,000 times over the next forty years. From that point forth, Conwell said, his life focused on making the best of the community in which he lived, first as a journalist, then a lawyer, and finally as a pastor.

It must have made him smile when ‘Abdu’l-Bahá, upon arriving in Philadelphia, told the Philadelphia Ledger: “Journalists must write significant articles, articles that shall foster the public welfare. If they do so they will be the highest promoters for the development of the community.”

‘Abdu’l-Bahá began his talk at the Baptist Temple stating that there are “two pathways in the world of humanity: the natural or materialistic, the other the religious or spiritual.” The first he said is the “pathway of the animal realm” which is ultimately self-serving. The animal “follows its own instincts and desires,” he said, “whatever its impulses and proclivities may be, it has the liberty to gratify them.”

But “man is progressive” ‘Abdu’l-Bahá remarked. He “possesses a mighty will.” The pathway of true religion, he said, “involves the acquisition of praiseworthy attributes, heavenly illumination and righteous actions in the world of humanity.” ‘Abdu’l-Bahá went on to enumerate the teachings of Bahá’u’lláh, among them the unity of mankind, the elimination of all forms of prejudice, and the need for economic justice, universal human rights, and universal education.

“This pathway is conducive to the progress and uplift of the world,” he told the congregation at Pastor Conwell’s church. “It is the source of human enlightenment.” 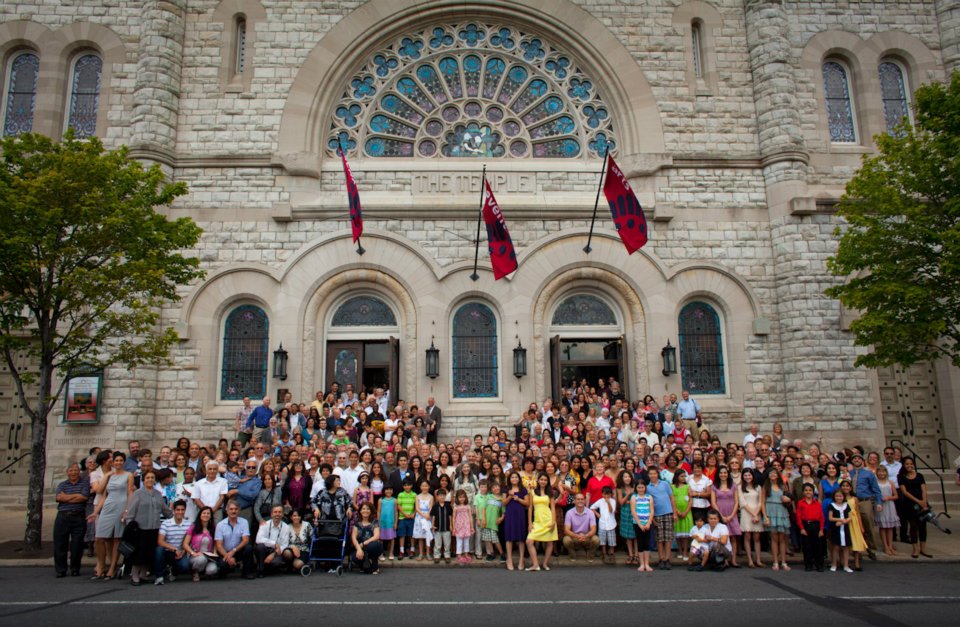 One hundred years later, Bahá'ís from Philadelphia and the surrounding area unite together to commemorate the anniversary of 'Abdu'l-Bahá's visit to the Baptist Temple in Philadelphia.
Photo credit for this page: Ryan Lash
Copyright 2012 The Local Spiritual Assembly of the Bahá'ís of Philadelphia. All rights reserved.